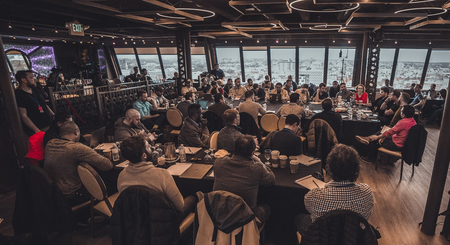 Well, I was.
I wanted to know the traffic generation methods the best of the best use to build their own businesses.
NOT the stuff they share with the public.
And NOT the stuff they teach in their courses.
I wanted to know their personal traffic generation methods; the stuff they spend their own money on.
So, I shelled-out close to twenty grand to host a private event. and find out.
I invited marketers from the Agora Companies, and over 45 of the most popular, most respected media buying and traffic generation experts on the planet.
All but one agreed to join us. (He's now dead to me.)
Then, for two days (February 15-16, 2019). in a private room at the Belvedere Hotel in Baltimore, Maryland. I pushed these experts to the max. Putting them on the spot, spurring them to give-up their best traffic insights.
And, to blaze a fire under their butts, I had a badass championship belt designed to award to whichever expert gave the most amount of value over the two days.
And, oh baby. this thing, of course, drove the experts WILD.
Out of ego, they wanted that belt. They were going nuts over it. Putting it up to their waists. Taking pics of it. Posting it on their social media.
Yeah. they wanted it. Bad.
Which is exactly why I had it created in the first place. All part of my plan. I wanted them charged-up to give, give, give their best stuff.
And boy did they!
(I'll tell you who won the belt in a bit.)
When all was said and done.
This gathering - what I appropriately call The Masters of Media Buying Mastermind - was "the MOST EPIC TRAINING event ever held on traffic generation and media buying, anywhere". Hands-down, bar none!
That's not my words. That's what almost all of the experts in the room said to me when we wrapped-up.
What made these two days so friggin' valuable?
Well, the volume of popular experts all gathered together for the first time, aside.
It's an easy question to answer; the stuff these guys revealed was INSANE!
I'm talking traffic generation strategies and tactics I not only never heard before, also presented with such clarity and depth even a non-media-buyer like me was able to get it all right away.
And, we covered A TON! I made sure of that. Because I had a ton of questions.
Check out the official agenda (below) sent to the experts in advance. We followed this baby to the tee:
Sick, right?!
In hindsight, I probably could have sold tickets to this bad boy for $15K or more a pop. And gotten it all day long.
I did have a pro A/V team record the entire thing for me and the experts in attendance.
I wanted to make sure I didn't miss a single word. And I wanted documentation of this historic gathering for posterity (and some bragging rights).
*** But, I have NO plans right now to ever sell these recordings.
If I do decide to sell them sometime in the future, you can be sure they'll command a pretty penny.
So, with all that being said.
This. right here. is your lil sneak peek (from my iPhone).
Behind The Curtain Of This Historic Gathering.
What process do you use to test and rollout new marketing funnels before you invest heavily in paid traffic?"
Posing this question is how I opened day one.
I wanted to understand what these top traffic experts do to test and prove new campaigns quickly. without wasting a bunch of money in the process.
Like. do they have a system for this?
The answer, I saw, is ABSOLUTELY.
For the next hour, the discussion was focused on the different workflowsused to roll-out new campaigns, the couple of metrics looked at to make decisions, and the benchmarks to hit before going out to paid traffic.
Really insightful stuff.
Probably, most valuable to me, was hearing Katie Vogel, the Chief Marketing Officer at Agora Financial, share how they prove-out their campaigns with email, first, to avoid any unnecessary costs.
I also explained the system we use at MFA for rolling-out new campaigns as Minimum Viable Funnels (MVF).
An MVF is the smallest number of funnel steps possible which can still confirm you have a winner.
It's the system we use all the time to see if we have a campaign which converts. BEFORE we waste any time creating any email sequences, upsells, down-sells, backend offers, or paid traffic.
SIMPLE INSIGHT #1: You need a system for quickly and safely proving the profitability of new marketing funnels before you roll them out to paid traffic. This is how you save yourself time and money.
DOWNLOAD
(Buy premium account for maximum speed and resuming ability)